On a long-haul flight, you’re used to having an abundance of inflight entertainment to keep you busy.

However, individuals who don’t know or are simply curious might be wondering: do pilots listen to music? Keep reading to find out more.

Do fighter pilots listen to music?

Although some fighter pilots like having the option of listening to music, it generally isn’t recommended.

With two radios and a lot of tactical information being shared on the frequency by controllers, you can’t afford to miss anything as a fighter pilot in combat.

Music can act as a distraction and can be fatal if you cannot focus on the task at hand.

Being a fighter pilot can be dangerous. To even be considered for the tough, lengthy training process that fighter pilots go through, you have to be in the top percentile of healthy, capable bodies.

As a result, fighter pilots generally don’t listen to music as the job is so busy and is grueling on the body.

However, there are, of course, exceptions when some fighter pilots do listen to music. For instance, music can be used on longer flights, such as deployments, when fighter pilots need to keep themselves awake.

Do pilots listen to music in the cockpit?

Yes, the FAA permits pilots to listen to music as long as it's not distracting.

Although there aren’t regulations stopping an airline pilot from listening to music, pilots must be able to hear ambient sounds or communications over the music.

Some modern headsets make it easy to link an iPod to headphones that are also receiving communications, meaning you can theoretically mix the comms with the music and listen to both. 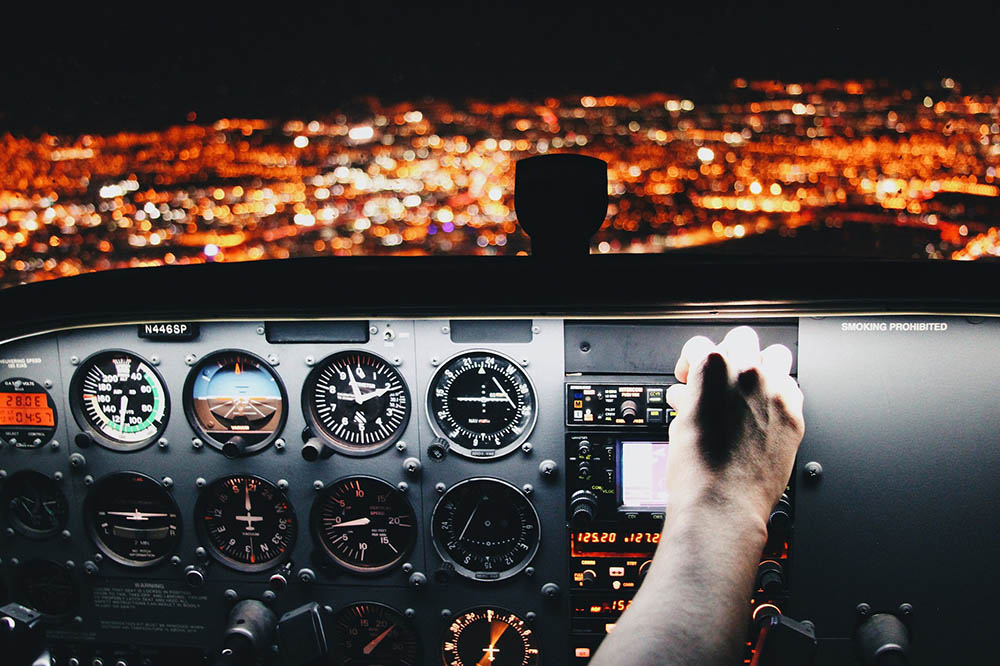 However, generally speaking, listening to music in the cockpit is frowned upon, as it lowers the overall situational awareness of the pilot and can be perceived as unprofessional.

This is because they’re in charge of a very important job, and many believe that with a plane full of passengers, they should be concentrating on the task at hand.

On top of that, in a two-crew environment, it means that there could be a breakdown in communications among the pilots.

Another thing to mention is that pilots will rarely experience complete silence when flying, and thus, the comms will consistently interrupt the music that they are listening to.

Although the length of silence will depend on where you’re flying, this combination of comms and interrupted music can not only become irritating to listen to but can also be very distracting for the pilot.

Listening to music can also result in the pilot missing radio calls.

Although this isn’t necessarily a problem the first time, if you continue to miss radio calls because of the music, it’s not only embarrassing for both parties but could also cause problems between the pilots.

Whether the volume setting is too high or the song is reaching its climax, the pilot doesn’t want to end up missing their clearance when flying.

At this point, listening to music becomes a hazard and safety issue and it is also embarrassing for the pilot once their colleague realizes what’s happening as it is incredibly unprofessional.

The pilot needs to be aware of their surroundings and should be able to hear any unusual noises that may occur on the flight.

This includes listening to whether the engines are running smoothly, listening out for any unusual sounds or vibrations, and being aware of what the plane feels like when they’re flying. Loud music can distract from all of these factors.

Flying as a pilot is primarily about what you see, hear, and feel. However, listening to music can significantly alter the senses and what you’d normally experience when flying a plane.

The question, then, isn’t can pilots listen to music whilst flying, but should they?

As a result, whether a pilot listens to music in the cockpit or not is a personal decision, but a lot don’t because it can alter their performance.

There are so many different aspects that a pilot needs to be able to concentrate on when flying a plane, so listening to music generally isn’t perceived as being worth it for the risks that it can cause.

There are no regulations to stop a pilot from listening to music, provided that he/she can still hear sounds and communications.

That being said, listening to music when flying can alter your performance as your senses are not as sharp as they would be if you were flying without it.

To conclude, then, whether a pilot listens to music in their own personal choice, but for the best performance, they generally won’t.